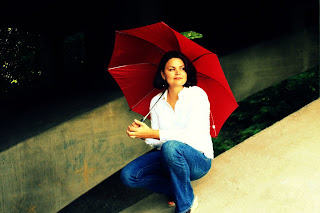 Gina Holmes is the bestselling author of Crossing Oceans and the newly released novel, DRY AS RAIN. She’s the founder of Novel Rocket, (formerly Novel Journey), a registered nurse,  wife and mother who makes her home in Southern Virginia. You can learn more about her at www.ginaholmes.com

Your debut novel hit ECPA, Amazon, PW and CBA bestsellers list (some throughout the span of a year!) For several weeks Crossing Oceans was the #1 free kindle download and then stay in the top hundred for a long time.
Beside the commercial success, your book was a finalist in every major Christian book award, including: Christy, ECPA, Retailer’s Choice, Carol Awards, and won RWA’s Inspirational Reader’s Choice and an INSPY. Does having that kind of success put the pressure on for your second book?
I try not to think too much about it. I didn’t expect that kind of success but am very grateful for it. I had a lot of pressure on me on this releasing novel, not because of the success of the first book, but because, unlike the first, I didn’t have all the time in the world to write it. Some books flow smoothly, this one I had to yank out like a bad tooth. I faced multiple rewrites, some of them pretty major, all while trying to promote my all important first novel. I was still working full time, mothering, running Novel Journey (now Novel Rocket) and all of that, so this was a tough tough book for me to produce.
Tell our readers about your latest release, Dry as Rain: 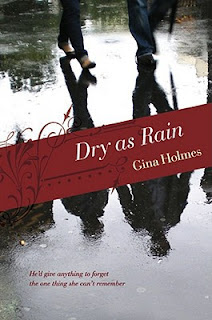 I’m a really bad pitchman so I’ll just repeat the back of the book copy:
Behind every broken vow lies a broken heart.
When Eric and Kyra Yoshida first met, they thought their love would last forever. But like many marriages, theirs has gradually crumbled, one thoughtless comment and misunderstanding at a time, until the ultimate betrayal pushes them beyond reconciliation. Though Eric longs to reunite with Kyra, the only woman he has truly loved, he has no idea how to repair the damage that’s been done.
Then a car accident erases part of Kyra’s memory—including her separation from Eric—and a glimmer of hope rises from the wreckage. Is this a precious opportunity for the fresh start Eric has longed for? Does he even deserve the chance to find forgiveness and win back Kyra’s heart . . . or will the truth blow up in his face, shattering their last hope for happiness? A richly engaging story of betrayal and redemption, Dry as Rain illuminates with striking emotional intensity the surprising truth of what it means to forgive.
You can read the first chapter HERE.
“Holmes grabs the reader with a unique storyline about infidelity and what it truly means to forgive after betrayal.  By looking at the situation from a different angle, the author provides a great deal of food for thought and contemplation.” RT Book Reviews – September, 2011

This novel feels so much different than Crossing Oceans. Why did you choose to take such a different path?
I didn’t intend to write something completely different and I think it feels that way because of the characters telling the story. In Crossing Oceans, Jenny was our narrator and she was a melancholy, all woman sort.
In Dry as Rain, we have Eric, who is a man’s man and doesn’t think in flowery language and descriptions so it would have been wrong to write him that way. While both books have a heavy subject matter, Crossing Oceans was much more so. You can’t get heavier than dying, so it was bound to be more emotional, no matter how I wrote the next book.
But, my genre seems to be relational drama which both are and I like to pepper in a quirky cast and that’s true of both books.
You took a lot of chances in this book. First writing first person from a male’s perspective, secondly to have the protagonist someone who does a lot of things that aren’t very Christianly, like cheating on his wife, drinking, lying, etc. Are you afraid this might hurt your sales in the Christian market?
Afraid? No. Concerned, sure. While I don’t personally have a problem with Eric drinking a beer, the rest I have a problem with too. The thing is Eric’s a nominal Christian at the beginning of the book, lukewarm about his faith like many who call themselves followers of Christ. This is his journey though and he doesn’t end up where he begins. I wanted to tell the story as truthfully as I could and at the end of the day let the chips fall where they may.
What happened to your long time website, Novel Journey?
www.noveljourney.blogspot.com is now www.novelrocket.com You can get to it by either address but we decided on an overhaul because we wanted to drop the blogspot address and just have a dot com. The guy who owned Novel Journey didn’t return our emails to sell so we had to do something a little different. This turned out to be a good thing maybe because we’d been chewing on broadening the site for some time. We’ve got some exciting changes now, the most notable is the addition of “Rocket Pages” a sort of Craig’s List for writers to find the services they need to launch and sustain their career.
What’s going on with you personally?
Well, I’m blissfully married, mom to two, stepmom to three, and owner of 2 dogs and a fish. I bought a guitar and hope to start fiddling with that soon and just writing a lot. Nothing too exciting over here but that’s the way I like it. I’m the happiest I’ve been in my life. I’ve accomplished many of the dreams and goals I’d hoped to and I always tell my husband, if I died today, I’d feel I lived and full and rewarding life. Not that I’m looking to die just yet.
What are you working on now?
I can’t give the title yet as that’s a work in progress but it’s a story very close to my heart. I’m more excited about this one than anything I’ve ever written. Hopefully my publisher agrees and you see it on the stands in the next year or so. That’s really all I can say for now.
Tell us something we don’t know about you.
I’ll tell you a few. I thought I was afraid of heights until I bungee-jumped and loved it. I’d love to skydive for the first time in the next year, white water raft and get at least a little skill on the guitar. My husband is a talented songwriter. My kids are the sweetest in the world, (yes, the world!), and I love to get my hands dirty. That should do it. Thanks for having me!