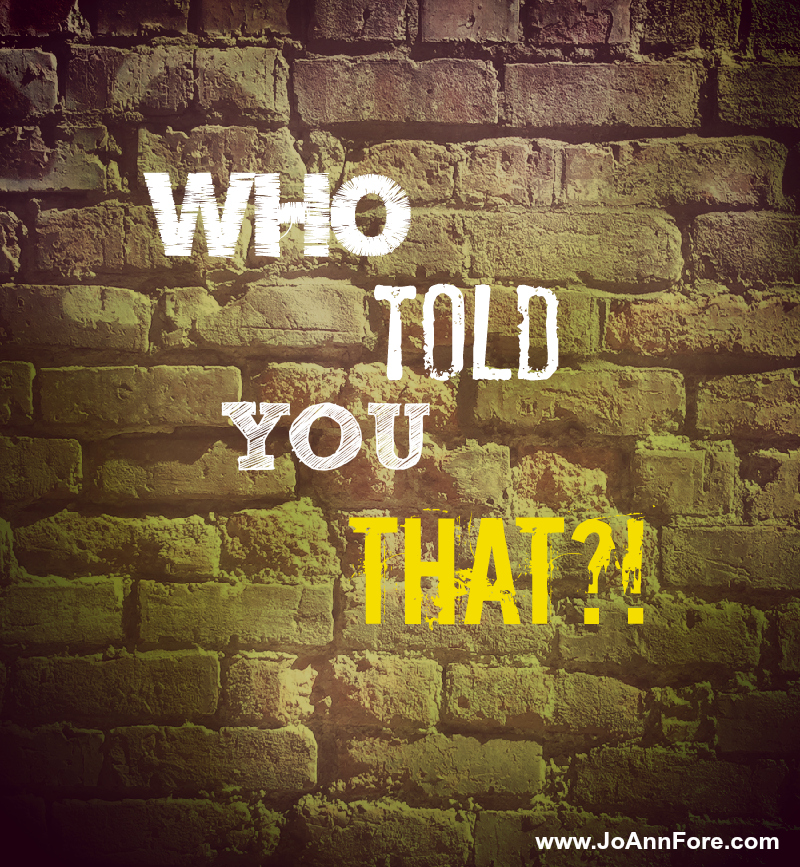 When wounds cut deep, the opinion of others sometimes matters most.

How much that must hurt God’s heart.

Consider God’s first recorded reaction when dealing with our triggered-by-others insecurities. One evening when the breeze fell among the trees in the garden, Adam and Eve lay open their painful remorse (Gen 3:11 MSG).

“I was afraid…I was naked and I hid.”

“Who told you that?” God asked.

Don’t you just love the question? God wasn’t sidetracked with their shamefacedness. He well knew the source of their shackling guilt but I believe He wanted them to consider that someone else had influenced their beliefs. A shrewd and conniving someone else.

God is steadfast, though. Today, He poses that same question to us.

Who told you that you are worthless? Not good enough? Unlovable? That what you say doesn’t matter?

Unhealthy lies breed a culture of silence where a low self-worth often blocks God’s best for our lives.

But there’s hope. If we’re willing to confront these lies, we release the hold they have on us. Christian author and speaker Mary DeMuth, a veteran of childhood trauma, understands.

“Growing up, I had a monster-like fear of death,” Mary shares. “At night, I shivered as I prayed prayers to ward off ghosts.”

Mary masked a fear that consumed much of her life. Enveloped in cold darkness, most of her nights were spent imagining horrific, dreadful things happening to her. In spite of a brokenness that poisoned relationships, Mary remained afraid to unearth any childhood pain. Emotionally isolated, cynical, and relationally inept, she walked many painful years in repressive denial.

“I avoided intimacy as much as I could so I wouldn’t rip open a festering wound I couldn’t handle,” Mary said. “But you need to be willing to ‘go there’ with Jesus. So many people aren’t healed because they are afraid to open up the can of worms of their past. I’m here to say, yes it will hurt, but that kind of hurt is what heals.”

Who has attempted to diminish, ignore, or squelch your voice?

What life-messages are you responding to? Worthlessness and shame from an abusive father? Criticism from a cynical spouse? Abandonment from an absent mother? The child forced to cover up family secrets? Close relationships with narcissists, know-it-alls, controlling or belittling people? A toxic religious system, even?

Father, we pray your gentle hand guides us as we identify and confront  any purpose-robbing lies that have penetrated our heart and mind. Teach us to hold any negative reflections under the magnifying light of your Word, your Truth. Empower us to overcome any unnatural fear of men, and to help stop making people bigger than You. Hold us close to your heart as we learn to need others less, and love you more.

11 thoughts on “When Wounds Cut Deep”