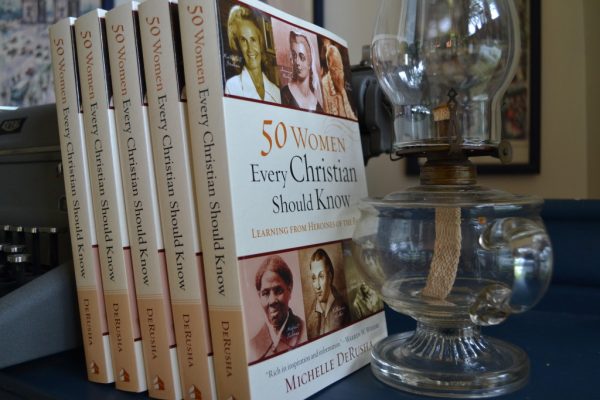 It was Day One. I sat at my desk, a typed list of 50 women at my side, my laptop open in front of me. I was ready, poised to embark on an eight-month research and writing project for a book about women in Christian history.

I glanced at the first woman on my list – Hildegard of Bingen: 1098-1179 – and paused. The twelfth century. What even happened back in the twelfth century, anyway? I wondered. Wracking my brain, I struggled to unearth deeply buried facts from my high school European history class. Was that when the Vikings lived? Or wait, maybe it was when the Crusades took place? Although I seem to recall something about a Norman invasion, too.

Turns out, I was a century off on all three accounts.

As I sat hunched over my laptop, my hands wrapped around a warm mug, doubts ping-ponged around my head.

Clearly I was not the right person for this job.

Clearly the publisher had made a grave mistake in contracting me, the woman who didn’t know word one about history, to write a history book.

I wanted to quit, even before I’d begun.

Luckily, Hildegard of Bingen, a nun living in twelfth-century Germany, had something important to teach me about resilience, perseverance and courage in the face of fear.

As her parents’ tenth child, Hildegard was dedicated to the church as a tithe when she was eight years old. At sixteen she officially “took the veil” and entered the convent as a Benedictine nun. At age 36 she experienced the first of her visions, messages from God which, over time, became more specific.

But when she heard God’s command to speak and write, Hildegard balked.

Can you blame her? God seemed to be instructing Hildegard to do what virtually no other woman was attempting at the time. As a woman and a nun living during an era in which most women were illiterate and certainly not encouraged to write or preach, Hildegard was afraid of God’s call.

And so she did what many of us do when we feel inadequate and insecure; when we are afraid of what we suspect will be a challenging directive from God.

“Although I heard and saw these things, because of doubt and a low opinion (of myself),” she later wrote, “and because of the diverse sayings of men, I refused for a long time the call to write…”

Finally, buoyed by a close friend’s encouragement, Hildegard penned what she saw and heard in her visions…and then some. She eventually produced three major theological works, including the 600-page Scivias, which she wrote over ten years while also serving as abbess of the convent.

Hildegard undoubtedly struggled with fears, doubts and feelings of inadequacy during those years. After all, while twelfth-century male theologians benefited from years of classical learning, Hildegard’s education was rudimentary at best. Yet she persevered, writing not only theological works, but science and medical books as well.

She trusted, in spite of daunting obstacles, that God had called her to this work.

As it turned out, this combination of perseverance and trust would be repeated in story after story and woman after woman, from the twelfth century to the twenty-first. In the end, Hildegard herself and the stories of the women who followed her gave me the courage to write this book. 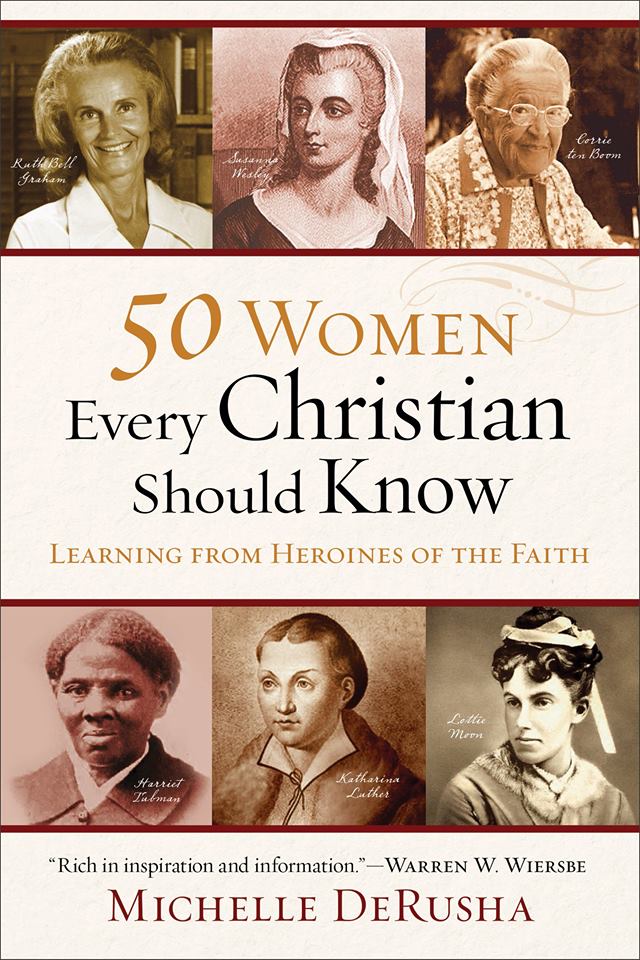 Hildegard of Bingen is one of fifty Christian women featured in Michelle DeRusha’s recently released book, 50 Women Every Christian Should Know: Learning from Heroines of the Faith (Baker Books).

From Catherine of Siena and Anne Hutchinson to Susanna Wesley, Harriet Tubman and Corrie ten Boom, this book of engaging narratives spans more than 900 years and brings into focus fifty incredible heroines of the faith – women who inspire and encourage us. Women who remind us that we are not alone, that the battles we face today are not new, and that God is always with us in the midst of our struggles.

Friends, Michelle is having an awesome contest and you still have time to enter! {Ends 10/22}
Take a few minutes to honor the woman in your life who has influenced your faith journey, either a personal heroine or someone you admire from history. {There’s prizes involved.} Hop over here to find more. But do that right after you leave us a comment below sharing the name of that person for a chance to win a FREE copy of 50 Women Every Christian Should Know: Learning from Heroines of the Faith (Baker Books).

Michelle is also the author of Spiritual Misfit: A Memoir of Uneasy Faith. She lives in Lincoln, Nebraska, with her husband and their two boys. You can connect with Michelle on her blog and on Facebook and Twitter.

41 thoughts on “Learning from Heroines of the Faith: When You are Called Beyond Your Comfort Zone”