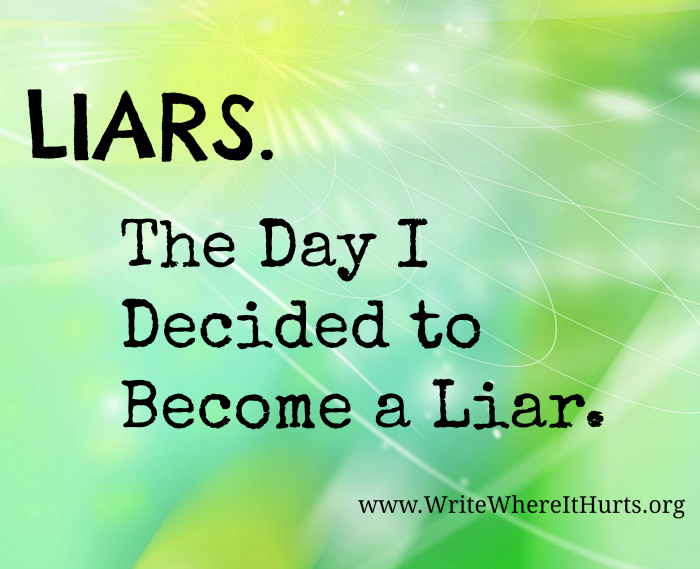 One thing I’ve discovered about you, we both want some of the same things: freedom, joy, and a good life. I believe that happens when we fully realize that our lives and voices matter. So for the rest of 2013, we’re celebrating the power of voice, your voice. Each week, we will feature a guest post from a brave-hearted reader who shares a slice of their own  journey to finding and using their voices {in the hopes of encouraging you to use your own story to make a difference}. This week we hear from Caryn Christensen.

I nod in agreement, intrigued, yet wonder how knowing my personality type will help heal my damaged emotions from an abusive childhood.

The test instructions were clear enough. Check the appropriate box that best fits you. Try not to over-analyze your answers.

I worry the eraser crumbs littering my paper give away the second-guessing; the internal argument and accusation over the legitimacy of each graphite stroke.

Likes To Lead… check. Except I’m not leading anything or anyone.

Has lots of friends… check. But none I trust.

Often Exaggerates… I hold my pencil, frozen in mid-air, over the box.

The words on the page suddenly grow blurry as hot tears pool, threatening to spill onto my paper. Having been labeled a pathological liar for as long as I could remember by my parents, I wonder if “Often Exaggerates” is just another nice way of saying, “Often Lies”.

Deciding to leave that box empty, I quickly brush away the tears, praying no one has noticed.

The following week, I presented the completed test to my counselor. As we discussed it, he offered a question that took my breath away.

“Then why does it bother you that you were called a pathological liar?”

I was incredulous. Why does it bother me? Was he kidding? “What if someone called you a liar?” I retorted, “Wouldn’t you be mad?”

My head began to ache and an all-too familiar knot formed in my stomach. Not understanding where he was headed with his questions made me feel even more out of control than usual.

He leaned forward and held up the test that had been lying on the coffee table that separated his chair from mine.

“Where is the person God created you to be? Where did she go? What made her want to cover up and hide?”

Consciously, I didn’t know. The knot in my stomach tightened, and my heart began to pound wildly.

Closing my eyes, I suddenly saw a picture of my brother and I together in my room. I was sitting cross-legged on the floor and playing with Lincoln Logs. He stood nearby, next to the bunk bed, dispensing his 6 year-old knowledge on me.

“It takes two people to have a baby,” he said matter-of-factly.

I stopped playing and thought for a long moment. I adored my big brother. We had endured more than a year of living in foster homes together after gross negligence and abuse were discovered in our home. He was my whole world and my hero even though he was only one year older than me. But I also loved to out-wit him whenever possible. “I know,” I said, buying time to think of a sly answer. And then I had it. “The mama and the doctor!” I smiled, feeling rather smug as I placed the roof on the toy cabin I was building.

He continued on, his arm fully extended as he swung around the bed post. “No,” he said, standing up and facing me. And in 6 year-old vernacular, he described the act of sex.

I looked up at the counselor’s face. His raised eyebrows beckoned me to go on. “What did you say after that?” he gently probed.

Once again, I closed my eyes and saw myself there on the floor. Little blonde tendrils hung softly against my fallen countenance. All the pleasure of trumping my brother’s riddle was gone. I looked into his round, blue eyes and quietly confided—

“Someone did that to me.”

His angry reply stunned me. “No he didn’t, or you would have a baby!” he yelled indignantly and stormed out of the room.

His innocently spoken words dangled heavy in the air like a noose, choking me into silence. I looked down at the green corduroy pants that covered my “private parts.” I lifted my blouse and peered at my tiny belly. I wasn’t sure, but I didn’t think there was a baby inside of me.

Suddenly, I was afraid that if I told anyone else what had happened, they would say I made it up. If I told them a full-grown man had stripped me of my childhood innocence and made me play the role of a full-grown woman, I wouldn’t be believed. The fact that there was no “proof” led me to the child-like conclusion that if my brother didn’t believe me, no one would.

It was at that moment that I decided to become a liar.

Not knowing how to regulate what I lied about, like a baby rattler that spits out too much venom, I began spitting out lies…over the next 20 years.

My tears turned into long, uncontrollable sobs. The dam had broken and I no longer had the desire to hold it back. I cried unrestrained; for the little girl swept up in confusion and innocent ignorance. I wept long-overdue tears for the young siblings who endured more tragedy than anyone should in a lifetime.

Then, unexpectedly, in the middle of my anguish, I became aware of God’s overwhelming presence. I heard his voice speak with authority, though it seemed only a whisper in my ear, “You shall know the truth, and the truth shall set you free.” Immediately, I understood. He had revealed the long-hidden memory to set me free. And for the first time since I was a child, I felt free. The old lies passed away and God began revealing my real identity. Honest, transparent, truth-bearer.

Deeper Still: Has fear ever driven you to silence or deceptiveness? How did you overcome it?

6 thoughts on “The Day I Decided to Become a Liar”