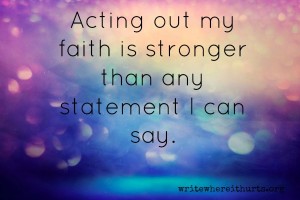 I can still hear my Father saying it. This was a frequent term he said while I was growing up, but I never understood the significance until I was out on my own making real world decisions.

So many times I’ve decided things in haste and didn’t pause long enough to think about the possible consequences.

Most of my major decisions were made out of fear for what other people would think because my heart was so consumed with the thought that I would let others down. I sometimes “went with the crowd” and behaved in ways that were less than stellar when those actions were lined up with my beliefs.

My father is a recovering alcoholic of 30+ years and admits the terrible mistakes he made while drinking. He asked for forgiveness and I wasn’t old enough to remember his behavior during that time in our family history. Most people see alcoholism as a physical condition but once you dig deep enough you find out it’s a way to fill an emotional void.

It’s so easy to give into the peer pressure of life when our feet are unsteady.

I can see now how my strong need for emotional acceptance was an addiction. I craved for others to want to be around me and like me. I needed to know I was loved and wanted.

I’ve experienced many grave consequences because of my choices within different situations. Some were calculated decisions while others were made on a whim. These moments caused me to change and bend to what the world wanted.

I married at a young age because I loved deeply but I was also frightened to be alone. This marriage ended in abandonment and heartbreak.

I chose to let others influence my choices in life and spent many years unhappy.

I was a lukewarm believer wandering aimlessly while wondering why bad things were happening.

These words, they haunted me when my life turned upside down.

Then came the day, that day I woke up and realized in order to live the life I truly wanted that I was going to need  to sacrifice my insecurities and fully accept God’s grace and mercy. I was going to have to change this phrase rambling around my mind stuck on repeat.

A good example is twice the value of good advice.

I heard the words on the radio one day and they spoke right to my heart.

That puts a whole new spin on those old worn out words, “Do as I say, not as I do.”  Slowly I began to believe in myself and put my faith into practice. Being a good example for others is far greater than any advice I could ever give.

Acting out my faith is stronger than any statement I can say.

DEEPER STILL: Do you need to change the record player spinning the same tune in your head? How can you make a small change each day to bring a fresh perspective to your circumstances?

4 thoughts on “Why Actions Speak Louder Than Words”